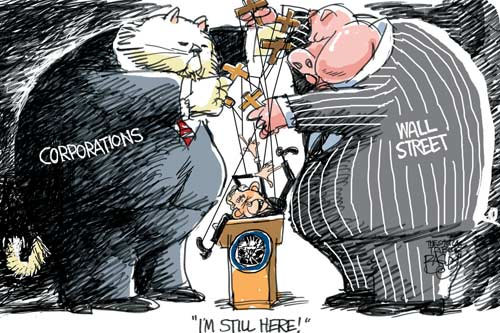 This was done on purpose. This is how the globalists steal a nation out from under the people of the nation.
First they install corrupt puppets known as politicians. Then they create a fake emergency like a pandemic, a war or a famine. This purposefully drives the country into debt so they have to borrow. In the US they borrow from the PRIVATELY OWNED FEDERAL RESERVE BANK.
The target nation usually has to borrow from foreign banks.
When the nation, surprise surprise, cannot repay the debt (by design), the bankers seize the assets of the nation to pay as debt or as collateral. They can do this overtly, or they can pretend to buy an asset for cents in the dollar. Examples of this are power stations that were written off as worthless and then sold, only to be revalued immediately and valued at astronomical values in comparison to the buyers price.
It is all a game. It is a scam. And your government is full of traitors who are willing to do their part to hand this nation over to the globalists.
The pandemic is fake and the debt was deliberate.
But as the Australian government is a corporate entity and is not THE commonwealth, the debt is theirs, not the peoples. If people wake up and take action, they will not be able to sell off our assets and we can reclaim them in the name of the people. After all, our ancestors, and ourselves paid for those assets with our tax dollars. They belong to us, not to a foreign owned and controlled corporate entity masquerading as a legitimate government.

SYDNEY, Sept 21 (Reuters) – Australia’s central bank on Wednesday said its equity had been wiped out by losses suffered on pandemic-era bond buying, but its ability to create money meant it was not insolvent and would continue as normal.

Reserve Bank of Australia (RBA) Deputy Governor Michele Bullock said the bank had taken a mark-to-market valuation loss on its bond holdings of A$44.9 billion ($30.02 billion) in 2021/22.

The bonds were accumulated under a A$300 billion emergency stimulus programme that ran from November 2020 to February 2022.

The losses eclipsed underlying earnings of A$8.2 billion and left the central bank with an accounting loss of A$36.7 billion. It also ate up all the RBA’s reserve funds, leaving it with a negative net equity position of A$12.4 billion.

Bullock noted that while this would bankrupt a normal commercial entity, the RBA’s liabilities are guaranteed by the government.

“Furthermore, since it has the ability to create money, the Bank can continue to meet its obligations as they become due and so it is not insolvent,” said Bullock.

“The negative equity position will, therefore, not affect the ability of the Reserve Bank to do its job.”

The RBA intends to hold the bonds until maturity and likely make a profit at that time, so offsetting the valuation losses.

Bullock noted other central banks around the world would be facing similar losses on their emergency stimulus programmes, though many did mark their assets to market like the RBA.

In July, the Swiss National Bank (SNBN.S) reported a first-half loss of 95.2 billion Swiss francs, the biggest since the central bank was founded in 1907.

The RBA also faces ongoing financial losses on its bond holdings which it estimates could range from A$35 billion to as much as A$58 billion out to 2033 when the last of the bonds mature.

As a result, the RBA expects to retain any future profits to rebuild its capital position and thus does not expect to pay any dividend to the government for a number of years, said Bullock.

That also means the RBA would not require a cash injection from the government, as happened in 2013 when the bank suffered valuation losses on its foreign currency reserves.

Treasurer Jim Chalmers earlier said he agreed with the RBA’s position and argued the bond buying programme had played a key part in helping the economy through the pandemic.

Chalmers recently set up an independent inquiry into the RBA’s policy framework, Board structure and communications. read more

When an avalanche begins do the principals of physics end.

Fudged figures for a record.

I am the worlds tallest midget. I am horizontally advantaged and follicle challenged.

View all posts by Juicey Brucey →